Following the Signs in the Masai Mara: the Creation of Ishara

A place like Ishara is one-of-a-kind, and can only come about from true dedication, immense love for the ecosystem, and a belief in the power of following one’s destiny. The creative force behind this incredible camp is Azhar Madhani—an entrepreneur, philosopher, and avid outdoorsman.

Ishara takes the safari experience in the Masai Mara to new heights—with each and every detail thoughtfully designed to be both sustainable and magnificently alluring. The story of Azhar’s vision for Ishara is a story of connection, perseverance, and faith in following one’s inner voice. 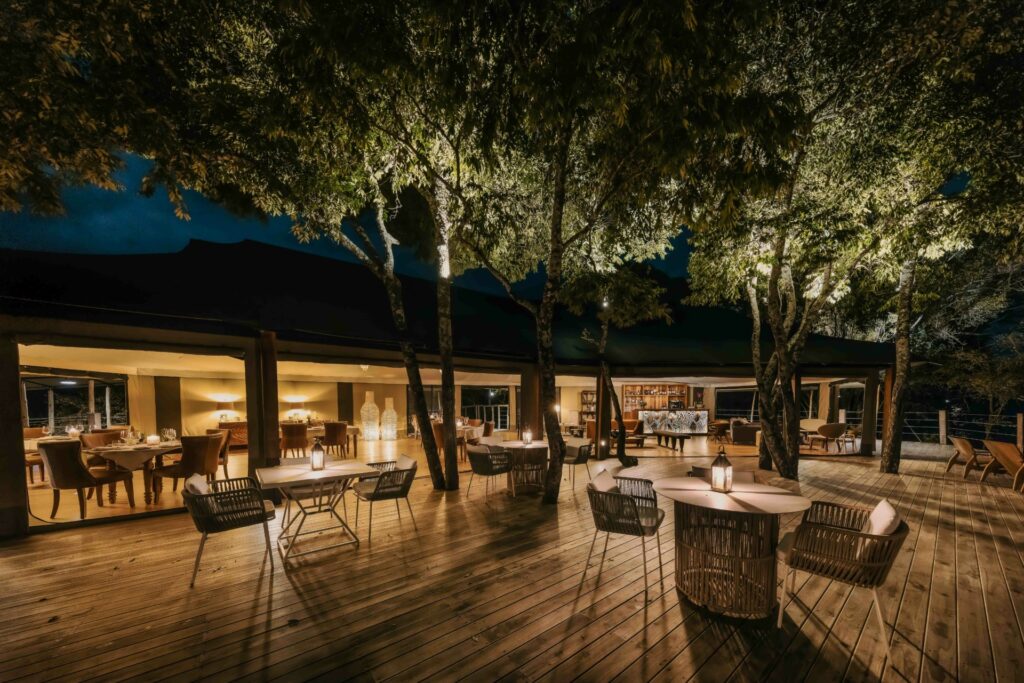 Eyes on the Horizon, Feet on the Savanna

Born in Nairobi, Azhar always had a love for the outdoors. While his friends played video games, he’d be enjoying time alone amidst nature. “It gave me a chance to reflect, and to connect with the world and myself on a deeper level,” he says. Azhar describes himself as an esoteric individual, and says that even as a young child he was constantly in search of greater meaning within his surroundings. “My favorite quote is by Rumi: ‘What you seek is seeking you.’”

In high school, Azhar started to regularly visit the Masai Mara, and developed a deep connection to the land. But it wasn’t until college that he realized just how much it meant to him. At Western University in Canada, where he was pursuing a degree in finance, he saw that his classes didn’t sync with his passions.

“Though this field taught me important fundamentals, it didn’t align with who I was as a person, and who I wanted to be. I switched majors and completed two degrees — one in global development, and the other in eastern philosophy.” 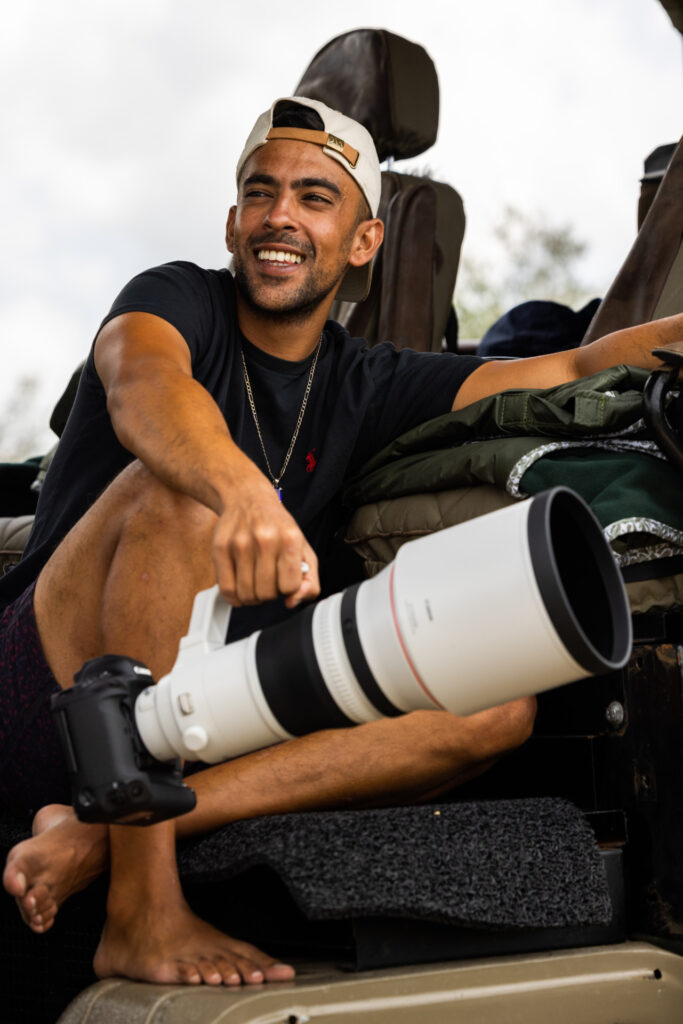 Azhar would return to Kenya on his summer breaks, spending as much time as he could in the savanna; sometimes staying at camps, other times simply camping on top of his car—bathing under the light of the star-speckled sky.

An Extraordinary Connection in the Masai Mara

Upon moving back to Kenya after graduation, Azhar worked at his family’s technology business during the week and ventured out to the Mara on weekends. “I got addicted to the thrill of being here, and nestling myself into this magical place.”

He befriended Pilot Naurori, whose family are indigenous landholders within the Masai Mara National Reserve. He and Pilot would go out on game drives together, tracking leopards and following the five brothers from dawn to dusk. 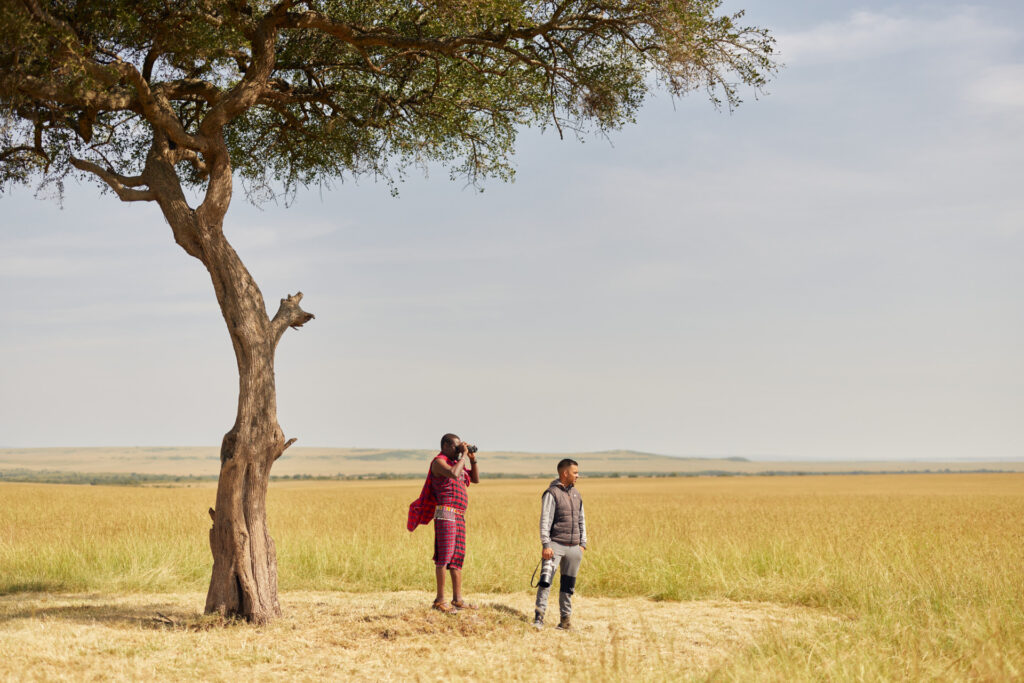 After one long morning of tracking cheetahs, Pilot sat Azhar down under an olive tree that stood across from a majestic fig tree by a river’s bend where Azhar frequently camped.

“There was a different energy here, the way the fig and olive trees were positioned, the way the river flowed…both trees hold deep symbolism in the Quran, and I felt so at peace here for reasons I myself did not understand.”

Pilot told Azhar that his family wanted to meet with him and had a proposal. “I had no idea what to expect.” That evening, as they roasted a goat over a fire, the elders spoke to Azhar.

“They told me that they could clearly see the love that I had for this space, and asked if I’d be interested in leasing the land and turning it into a tented camp—a place that would bring sustainable revenue to the community but also become a place I could call home. It was an incredible and unexpected offer.”

After careful consideration and many conversations with his family, Azhar recognized that this was his path. Together with his mother, father, brother, and sister, he began to create Ishara.

Building a Dream in the Bush

“People ask me all the time, ‘how did you find this location? People have been searching for a place like this for decades.’ But the truth is I didn’t find it, it found me.” 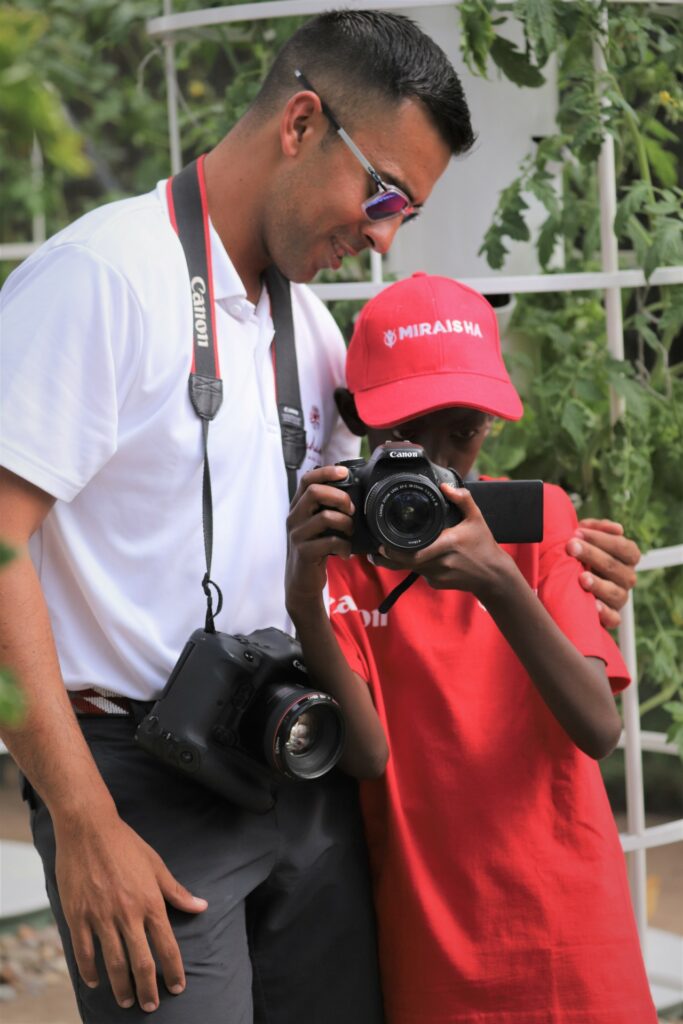 From the beginning, Azhar had a clear idea of what he wanted Ishara to be. To him, building this camp wasn’t just about showing travelers a breathtaking part of his country—it was also about supporting the indigenous Maasai community, and giving back in multiple ways. It was about creating a place that showcased the local culture and contemporary African design, using homegrown artisanal craftsmanship and infusing a youthful spirit into the safari industry—one that represented the ideals of a new generation. Azhar worked diligently to incorporate meaning behind each element of the experience, and insisted on building the camp in the most eco-conscious way.

“I didn’t want to cut down any trees, which forced us to get creative. To build around the trees for the outdoor dining deck, we had to make the tent curved, which was the first time our contractor ever built such a tent.”

There were numerous such challenges to face and overcome. Many experts and industry veterans resisted the desire to do things differently, but Azhar and his family were adamant in their vision of creating the camp their way. The scope of the camp also changed over time. What was initially meant to be a collection of tents grew into the current Ishara when it became clear that Ishara’s prime location and close proximity to wildlife resulted in shorter safari drives—affording guests the luxury to rest and rejuvenate while on vacation. Amenities like a pool, gym, spa, and photo studio became part of the Ishara landscape.

“Our distinctive bridges, for example, not only serve as a functional means of transportation, but they also represent connection—connecting people with each other and with Mother Nature. To me, that is what life is all about.”

He and his brother worked hand in hand on the build, logistics, and operational aspects, while their father helped with the architectural planning and supported them with decades of business experience—giving them the guidance to learn and the freedom to make their own decisions. Azhar’s mother and sister took over artistic direction, sourcing and designing artifacts and pieces that would represent the rich culture of the Mara, and the contemporary story of Kenyans. 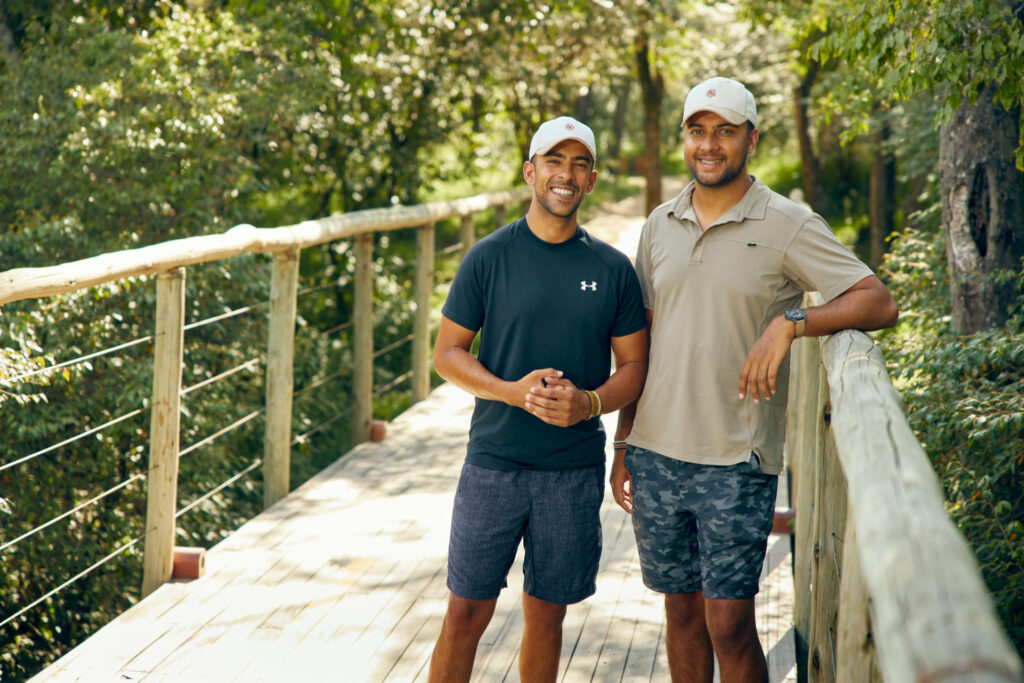 From sourcing staff and materials through global lockdowns to assembling and leading teams, Azhar flourished into a respected entrepreneur—settling for nothing but the very best. He conceptualised the creation of a waterhole to reduce the carbon footprint of over 200 trucks of murram needed for roads and foundation work, while at the same time creating a micro-ecosystem and year-round water supply for wildlife to thrive. He insisted on custom-designing and outfitting fully-open Land Cruisers with a variety of unique features, and, after a decade of driving across the varied savannah terrains in all kinds of weather, personally trained each Ishara guide on how to handle these vehicles. With no road access leading up to each tent, he and every available hand carried and installed vintage copper tubs weighing over 250 kilos each so that every suite would have the ultimate in outdoor bathing luxury. 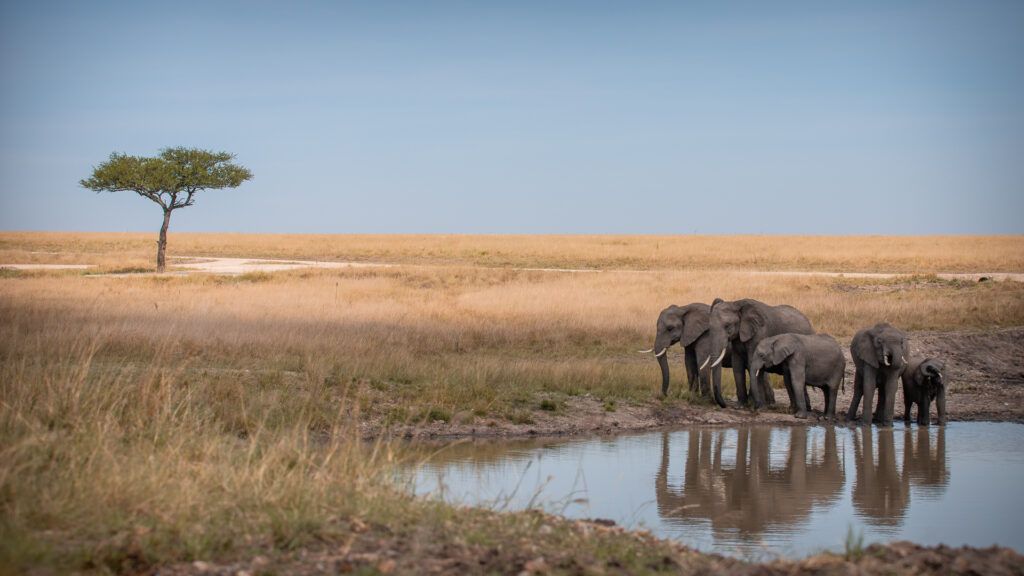 The prospect of his dream becoming a reality powered his persistence and perseverance, and reinforced the bonds among his family—they worked for three years with a dedicated team to plan, build, and perfect Ishara. In March of 2022, Ishara debuted to the world; the Mara has never seen anything like it. 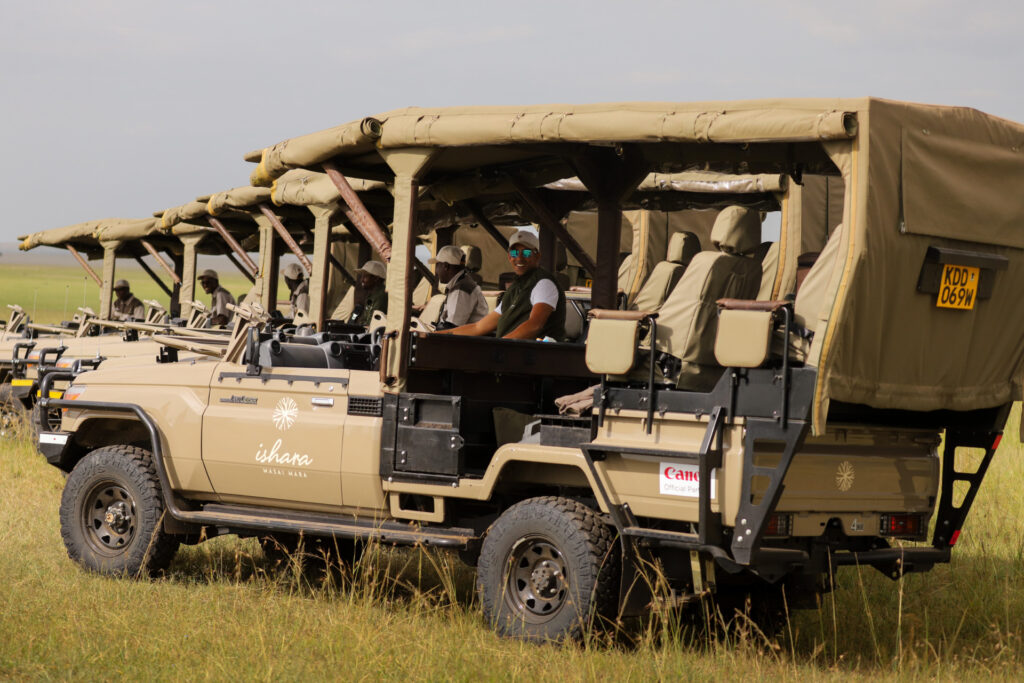 “It’s been an amazing journey, and I’m so grateful that the universe gave me the opportunity to chase a dream—not many people are given that chance in life.”

Ishara truly redefines ‘safari’, and what it means to experience the pinnacle of luxury and sustainable design in the African bush. With unwavering faith, Azhar listened to the signs and remained steadfast in his values. He created a remarkable jewel in the Masai Mara—a holistic escape for anyone seeking adventure, connection, and awe.

About Ishara
Our Location
Our Team

Stories from the Wild