The Tano Bora Cheetah Coalition: a Story of Friendship, Perseverance, and Loss

“No matter how brilliant your mind or strategy, if you're playing a solo game, you'll always lose out to a team.”

Alliances, rivals, victories, and hardships—the life of a cheetah is complex, and although they may be seen as blood-thirsty carnivores, their basic needs for survival are no different from our own.

The Tano Bora, meaning ‘The Magnificent Five’ in Swahili, was the famed cheetah
coalition here in the Masai Mara—captivating observers with their stealth, strategy, and striking beauty. Wildlife photographers, journalists, and fanatics from all over the world knew about this unique band of brothers, and excitedly stayed up-to-date on their latest ventures. However, due to some heavily debated events, The Magnificent Five is now down to three. 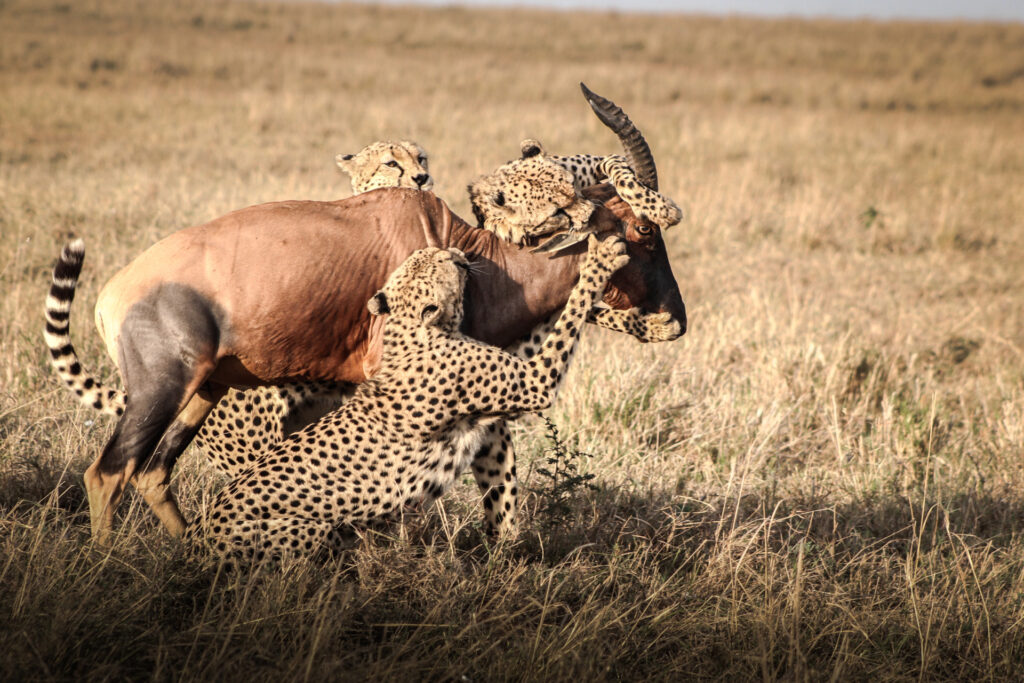 After about 20 months of carefully absorbing their mothers hunting tactics and learning how to survive, cheetah cubs are left to fend for themselves. They stay with their brothers and sisters for several months until reaching sexual maturity, at which point the females and males separate. Typically, cheetah males either become solitary or join forces with another cheetah male (usually a sibling) to form a pair—this is helpful when hunting and protecting their territory. In the case of Tano Bora however, two pairs of brothers from different families and one solo cheetah decided to come together, and the reason for this still mystifies biologists and aficionados alike.

A Leader’s Rise and Fall

Considered to be the smallest member of Tano Bora, Olpadan came to the Masai Mara from the Serengeti with his sister Siligi. He met his four adoptive brothers in December of 2016, just one month after parting ways with his sister. Fearless and feisty, Olpadan established himself as the dominant male in the coalition, initiating hunts and leading the group across rough terrain. Though he certainly pulled his weight, Olpadan could be a bit of a bully, and would often pick fights with Olonyok during his aggressive outbursts. Thankfully, Olarishani would always step in to protect his blood-brother, and soon become co-leader with Olpadan due to his advanced hunting skills and peace-making tendencies. 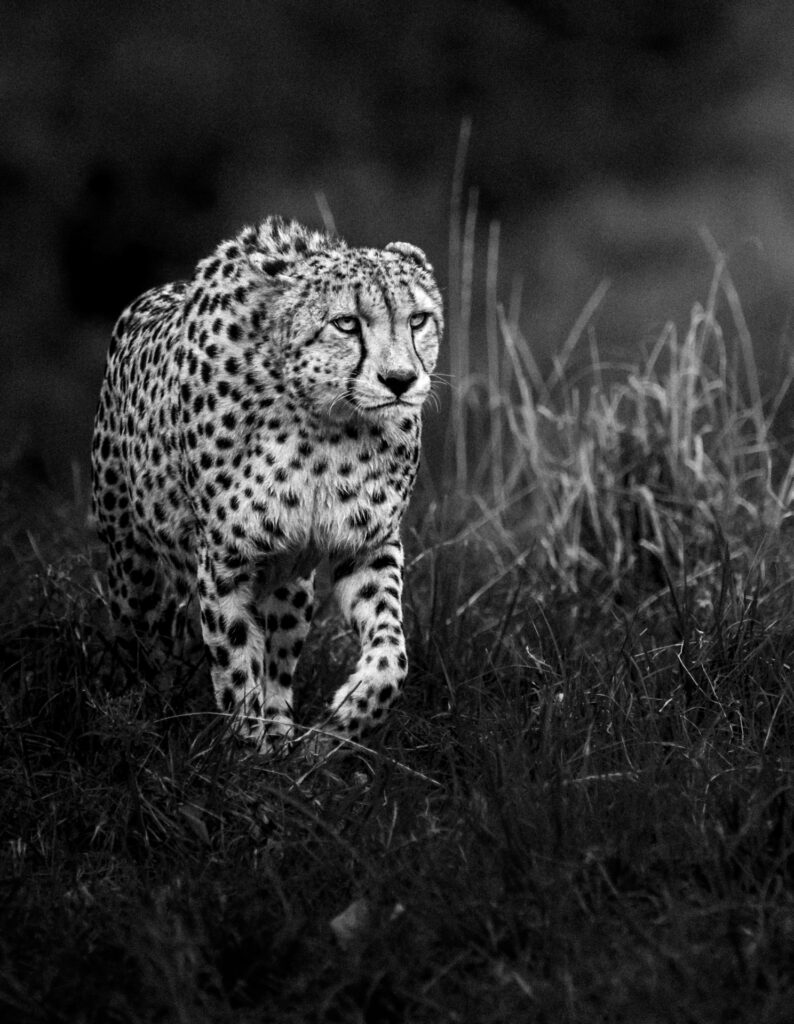 This hierarchy remained stable until the beginning of 2019, when Winda and Leboo started to regularly attack Olpadan. It’s common for male cheetahs to target the anogenital area of their rivals, which is what occurred during one of these attacks. Due to the severity of his injury, veterinarians intervened and Olpadan underwent orchiectomy surgery to his testicles.

When the highest-ranking member of a coalition loses his place, he is moved to the lowest position. Olpadan returned from surgery to a different reality, with Olarishani and Winda as the new leaders of Tano Bora. The fallen leader was sent to the back of the line, feeding last and getting no say in their hunting approach. Interestingly, Olonkok did not hold resentment towards Olpadan for his frequent bullying during his days as leader. With a forgiving heart, Olonkok was the one who tolerated eating next to Olpadan, and engaged with him in mutual after-feeding grooming. 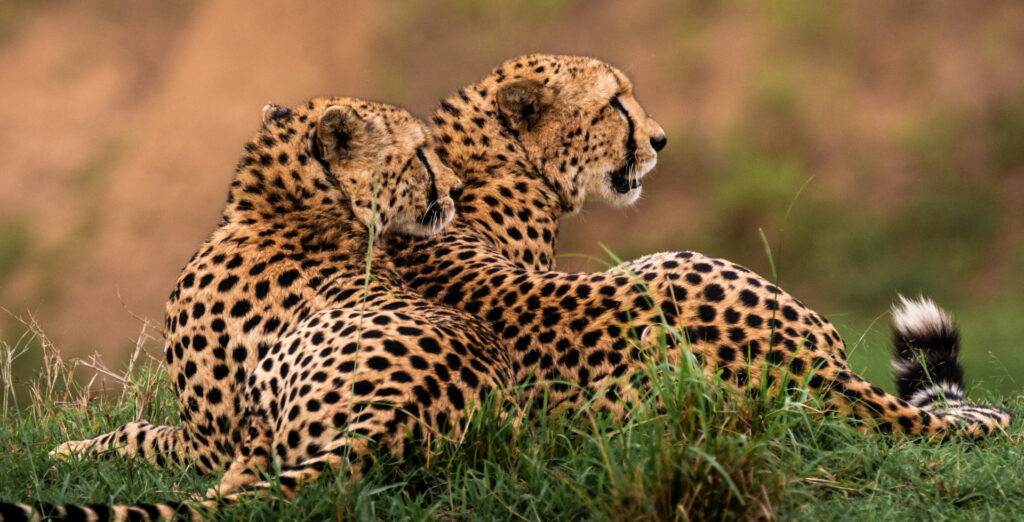 A Bruised Ego and Brotherly Betrayal

With shattered pride, Olpadan began to repeatedly leave the coalition for short periods of time, consistently coming back to his skeptical brothers. On one occasion, after the group had a territorial squabble with two outsiders, he was seen following the two foreign cheetahs instead of his brothers, displaying submissive behaviour, sniffing them, and resting nearby. However, this pair was not about to let an outsider into their partnership, and when Olpadan came crawling back to his four brothers, they dutifully accepted.

The next time Olpadan tried to leave the group however, the reaction was anything but delicate. In June of 2021, the intrepid cheetah left the coalition to mate, and formed an alliance with a younger male named Kijana. The partnership between the two did not last long, and by the next month Olpadan was on his own. Though he tried to avoid his former gang, laying low can be hard for a lone cheetah. Upon encountering his old squad a fierce fight broke out, leaving Olpadan severely injured in his right eye.

After this incident, Olpadan survived as a lone male with eyesight in only one eye for quite some time—feasting on impalas, resting in the shade, and speeding through the vast open plains. Life, however, does not always turn out as planned. On the morning of 26 January, 2022, Olpadan was found dead, with injuries that resembled cheetah bites.

It is not confirmed that his former gang were the cause of death, but one wildlife photographer stated that he saw the four brothers fleeing the scene with “bloody paws”. 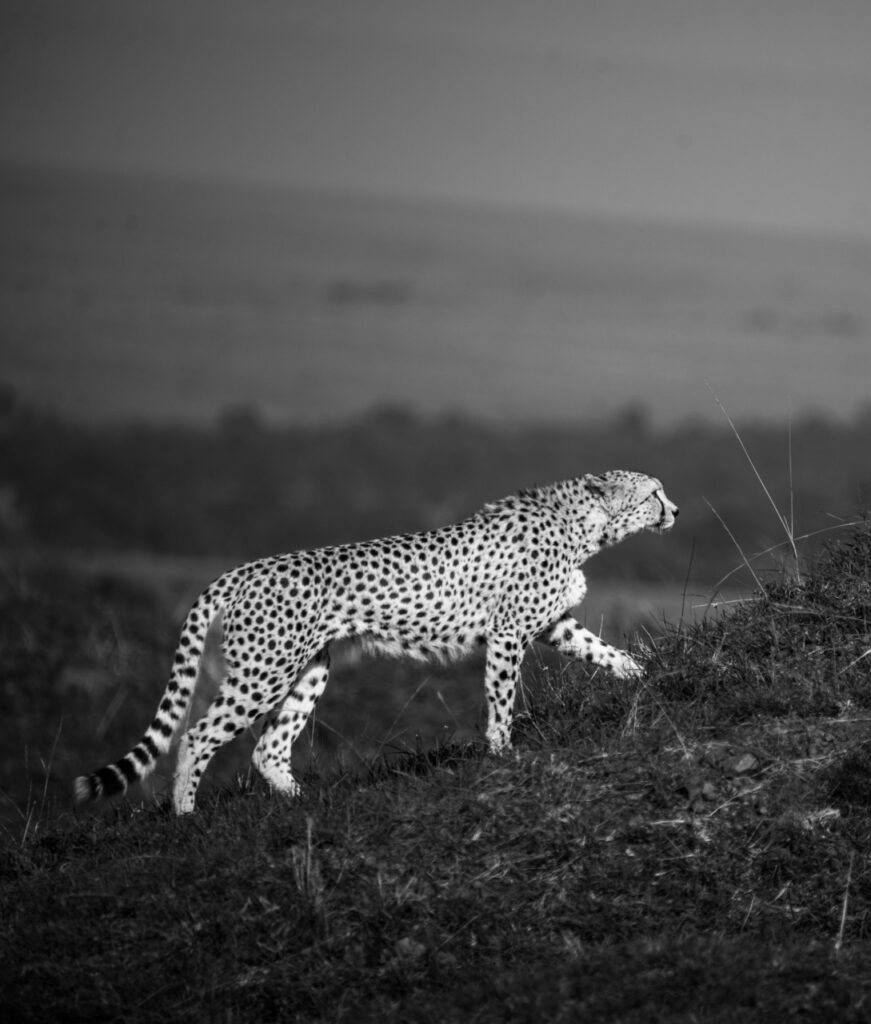 The Group Gets Smaller

After the death of Olpadan, the remaining brothers, referred to as Nne Bora, ‘The Magnificent Four’, carried on with their lives as cheetahs do—with Olarishani and Winda continuing to co-lead the group. Some experts say that the brothers acted more harmoniously during their hunts, and showed little aggression towards one another. With one member in charge of stalking their prey while the others helped to take it down, the brothers continued to feast on animals three to six times their weight, such as topi and wildebeest.

The life of a cheetah is vibrant, but with that comes many dangers. Olarishani, the peacemaker of the group, was seen with severe bite marks on his body in the early weeks of February 2022. Some believed the bites came from a lioness protecting her cubs, while others said they had seen the brothers crossing the Talek river, and the bites were from a crocodile. Vets decided to step in to treat the wounds, and upon further inspection they declared that the marks resembled cheetah bites.

Fans and followers of the famous brothers had high hopes for Olarishani’s recovery, and although he held on for as long as he could, the noble cheetah passed away under the shade of an orange leaf croton tree on 13 February, 2022.

It is not confirmed what exactly happened to Olarishani—perhaps he got in a fight with another cheetah male over territory or food. It is comforting to know that Leboo and Winda were with him during his final hours, but his blood brother, Olonyok, was nowhere to be seen. 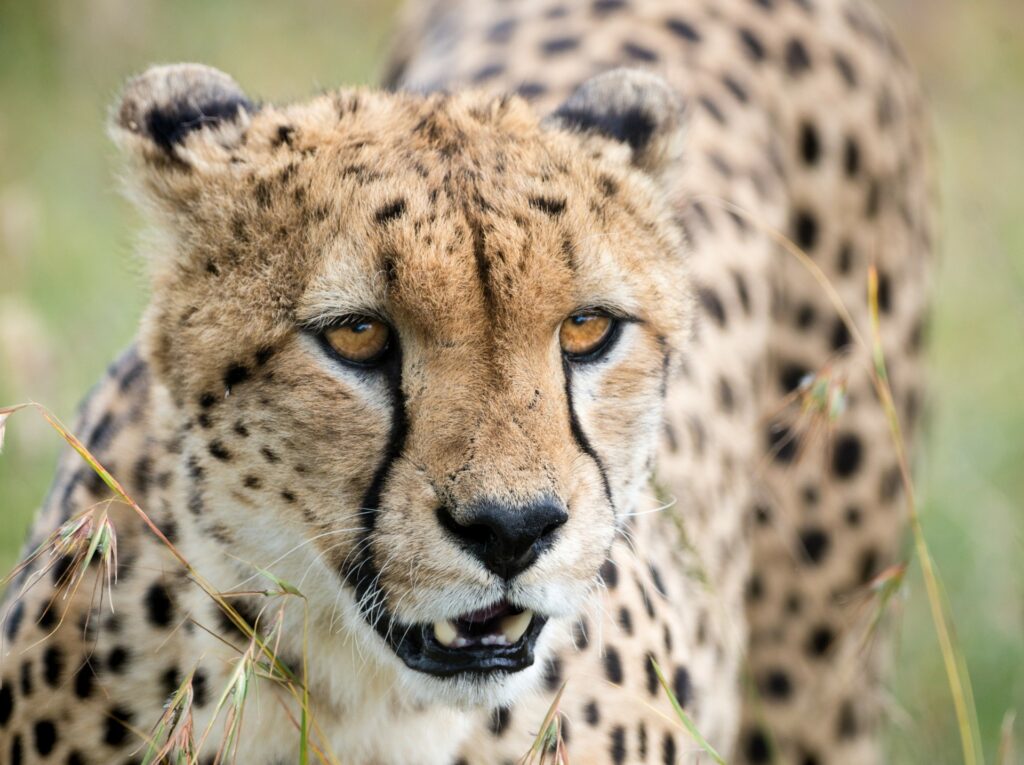 The Brothers’ Next Chapter

The Tano Bora boys were a true anomaly within their species. Although they were a force to be reckoned with among prey, the intricacies of their social life had its complications. It’s possible that coexistence with other males was simply too difficult for Olpadan, and maybe Olarishani acted too peacefully in the face of threat.

For now, Tatu Bora, ‘The Magnificent Three’, are continuing on with their adventures in the Masai Mara, with Winda leading the trio. 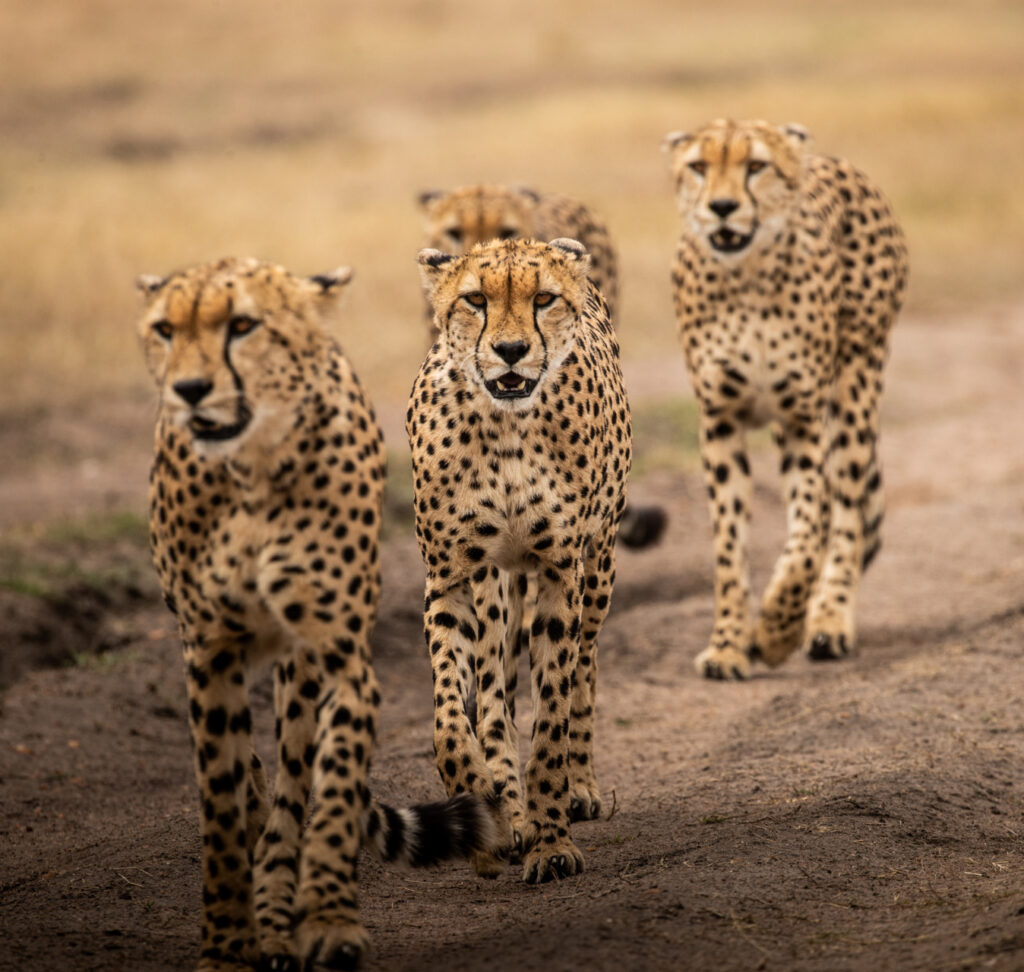 Although the demise of the famous Tano Bora has been devastating for many, we know that in the Mara, the unknown, unexpected, and unusual is what provides excitement–and it’s what makes this land so captivating. The contrast of life is inescapable—as darkness and light, alliances and rivalries constantly compete for centre stage. Here, each day is filled with life’s greatest moments, and from a being’s first breath to its last, you never know how its story will unfold.

About Ishara
Our Location
Our Team

Stories from the Wild